Patience is a virtue. Now let’s cap some fools and steal their ride

Rockstar Games’ Grand Theft Auto V is finally on the PC after some painful years for desktop fans of the crime sandbox series, like having to endure the next-gen consoles getting theirs first. It’s PC that has the last laugh, with an incredibly versatile edition of GTA V paying off.

There’s a duality to Grand Theft Auto V – it’s both new and old. It’s not going to offer that same surprise its narrative did first time around, but the immense work you can feel that went in to it - not as a port, but as an actual PC game - breathes all-new life into those same capers. It’s also great and unfortunate for someone completely new to this instalment, as they get to experience it first time but don’t see the evolution it has taken to PC, and so can’t appreciate the sheer scale of work. 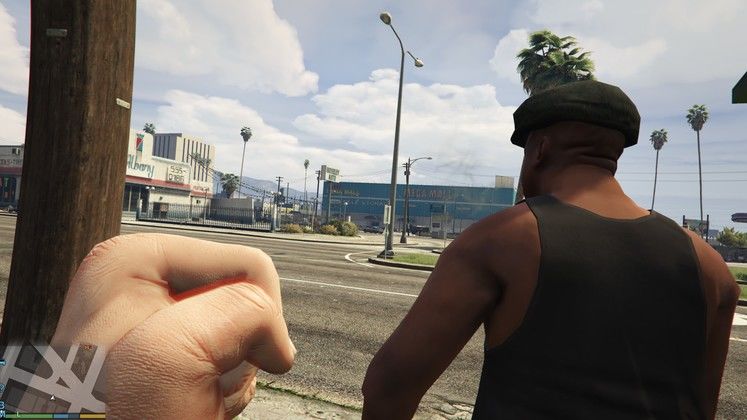 First-person opens up a whole new way of looking at things, like how terrible a person you are

As this is the PC edition one of the very first things you’ll be doing is nosing around the game’s settings, of which there are many to delight mouse wielding users. Visual settings are split between Display, Graphics and Advanced Graphics. The latter is more for those sporting so much raw power in their rig that some extra shadows and draw distance can be thrown in. Most will stick with the normal Graphics page, considering here is where the meat of the game is. It’s got virtually everything you need to tinker with the open world, including street density and variation.

I’ve managed to keep an incredibly smooth 60 frames per second with everything cranked as high as it can go, except for anti-aliasing (MSAA) which I limited to 2x with Nvidia’s TXAA switched on. Going higher than that really hits system performance, and honestly GTA V isn’t that bad when it comes to jagged edges, with the mini-map / radar actually being the ‘worst offender’ to my eye. Usually a game’s built in benchmark can be a good indicator of what to expect, but sadly that’s not the case.

In fact I hit a problem many have come across, where launching the benchmark to see how your settings fair in-game actually launches both the benchmark and Story Mode. Whilst I was treated to some of the scene montage to test my configuration, I was also hearing the opening moments of the game. This led to the part where a jet fighter is soaring through the world to suddenly stop with ‘Mission Failed’ coming up on screen. It’s an odd bug, but really served as a lesson that the benchmark is pretty useless and that getting into the game proper is the actual test.

I’m running an Intel i7 3930k pushed to 4.25GHz, 16GB RAM, and two overclocked GeForce GTX 780 Ti cards in SLI. I really wasn’t expecting to get away with the game settings being set to Very High and Ultra but I cranked them up to see how things would go. I was astonished to see the frame rate not only so high but steady and stable. That isn’t to say there’s no trouble now and then, as it does suffer from an occasional odd plummet but these are very few and far between. You also won’t notice just how impressive the world can look in the opening hours, but it creeps up on you.

A downside is the level of detail’s draw distance for GTA V, which shows very clear pop-in to higher resolution textures. It can be quite jarring at times when you’re flying down the highway in the city of Los Santos, as you’ll see lights and signs springing up. Cars will also disappear and poof out of thin air if you can see far enough away. It’s something that could be obscured better on consoles but the PC version can easily show the cracks in the system. Again, driving a lot at speed, you can see all the litter in the world seemingly spread around you as if by magic. Hopefully Rockstar can tweak it in a future patch to let us mess around with some serious draw distance modifiers. 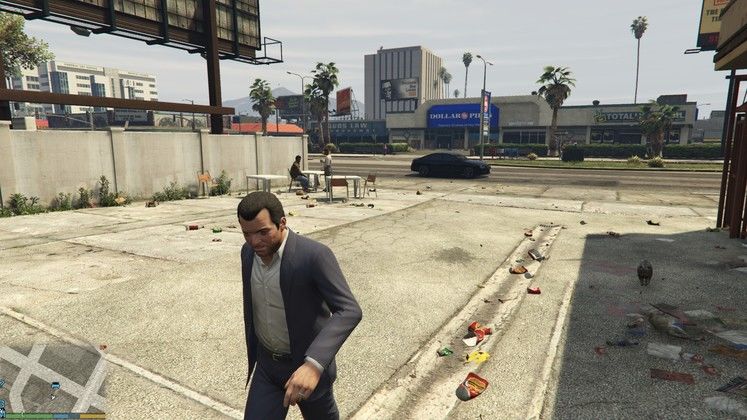 Draw distance and level of detail is great if a bit too short, plus they got kitties now

When fiddling with graphics settings a bar at the very top indicates, or estimates, how much VRAM you’re using up. You can let the game warn you about this or tell it to keep quiet. This isn’t an actual representation of what your PC can handle, as the only real measure of that is to actually play the game. Still it’s a nice reference to keep in mind. It’s during the daytime in-game that frame-rates are put under the biggest strain as they’ve got a lot more to process, as opposed to night when it’s mostly street lights and buildings. Unless you’ve got a GeForce TITAN or the like, it’s best to leave off the Advanced Graphics options as they give too little and take a lot in return.

Switching between the main three characters – Michael, Franklin and Trevor – is also much smoother and a heck of a lot faster on PC. One of the grips on console was getting stuck high in the air whilst it loaded everything to dump us back down. Now the transition is virtually seamless, except when you decide to switch over to GTA Online, then it’s a bit of a wait connecting.

Grand Theft Auto V natively supports keyboard and mouse, with a big array of settings that include being able to set mouse sensitivity for flying, driving, on foot and even the submarine. You could always use a game controller, and thankfully they switch between them seamlessly with on-screen prompts flicking back-and-forth. Key-mapping is open to those who prefer to customise their layouts and first-person mode is a great compliment to using K&M, although don’t go expecting Call of Duty or Battlefield-style level of precision in first-person. Everything is just a little off in aiming, as it’s meant to be in this the third-person action game. 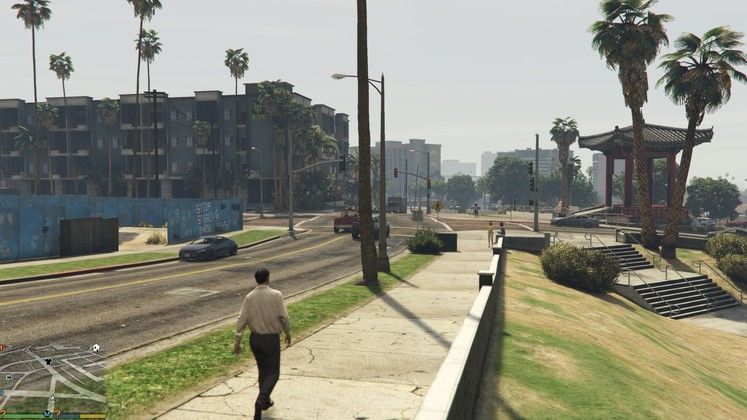 An excellent addition is the new radio station supporting our music which we can just dump into a folder for GTA V to scan and play in-game. You could just have the tracks play in order or randomly, but you’d be missing out on the Self Radio feature which presents our music as if it were on a real radio station complete with banter and commercials. It’s something they did in the previous Grand Theft Auto IV and many, including myself, are thankful it has seen a return.

GTA Online is of course provided right alongside the main single-player game, as it has been for every platform. While it hasn’t suffered anywhere near as badly as the initial debut for Rockstar’s first major multiplayer in the Grand Theft Auto series, the huge launch on PC has nonetheless stressed out servers with some lengthy wait times and timeouts to joining sessions. This is compounded even more when trying to join up with friends or crew, but I expect it will stabilise and improve as player levels settle over the coming months. Still, an option to just retry and connect to a session without dumping us back into Story Mode should really have been included by now.

Having played and reviewed the original release for PlayStation 3 when it launched I can say the PC version of Grand Theft Auto V is no mere port, and that Rockstar Games have learned a great deal from their troublesome GTA IV days when it landed on PC. You’d think GTA V had been purpose built for the PC, and that’s because it has been – from the generous array of graphics options, to native keyboard and mouse support – Grand Theft Auto V isn’t disguised as a PC game; it is a PC game.

Watching a buddy, whom I plotted with to heist ourselves a military jet, run into the back of his own helicopter’s tail rotor in GTA Online. It pretty much summed up the whole caper. #YOLO