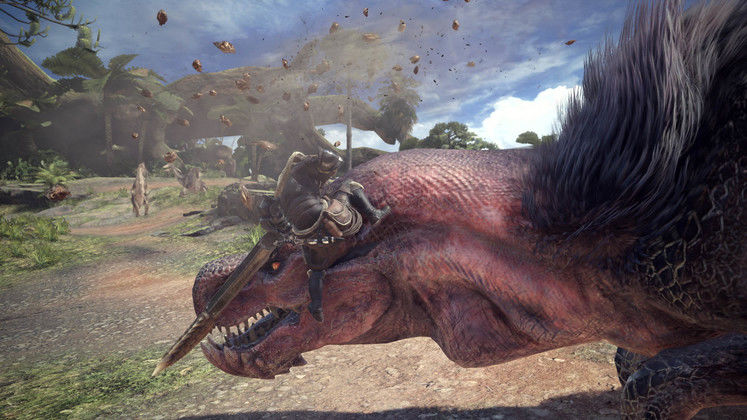 Describing Monster Hunter to an outsider has always been difficult. Even hearing about it through other writers back then didn’t prepare me for how the franchise actually played. Jumping into an early hunt back in the PSP days, I was expected to chop up Aptanoth. But for whatever reason, the creatures proceeded to throw me through a hoop. The Monster Hunter World PC port, however, is the most welcoming (and best performing) version to date.

Monster Hunter is essentially a world filled with little more than boss encounters. Rather than wade through waves of enemies to reach a more challenging encounter at the end of a road, Capcom’s famous franchise sends you against these beasts as a primary objective, with any local wildlife you find on the way either being totally ignored or gutted for meat and materials. So when I spent probably more than an hour being bashed around by what were essentially trash mobs, I wasn’t feeling too good about myself.

While I certainly stopped there for the time being, I picked up the franchise again when Monster Hunter Tri landed on the Nintendo Wii. Having the action on the big screen made a big difference - as did the easier handling of the camera. I was hooked. 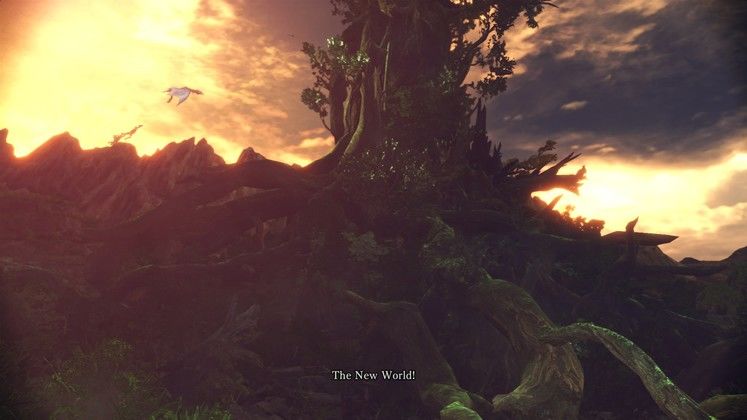 Fast-forward to 2018 and Capcom clearly managed to capture a much wider audience with Monster Hunter World than they ever have before. In fact, it’s become Capcom’s best selling game to date. But how did a franchise known for its unforgiving new player experience finally manage to break out of its own shell? By ridding itself of the convoluted garbage its acquired over the years.

I’m a big Monster Hunter fan, but even I know past games have been unnecessarily hard. And not because of the fights. If anything, FromSoftware and the rise of the roguelike has prepared and trained a new generation of players to enjoy a good challenge.

Rather than bosses crippling themselves with silly gimmicks and weaknesses, we’ve been taught to be patient with our attackers; learning their moves, reading their tells and identifying the best time to strike back. This is what Monster Hunter has always been about, but it’s how this core value was lost under complicated stats and menus that intimidated an otherwise interested audience. Those who put in the time to learn were often converted into those who would attempt to introduce the franchise to others. It was a slow and steady cycle. 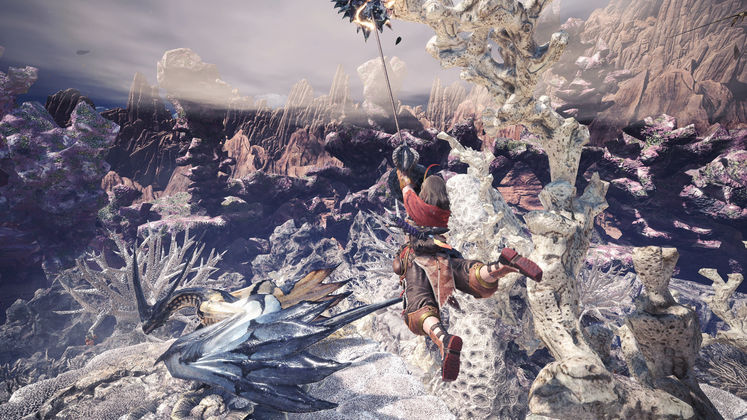 Monster Hunter World, however, sheds quite a lot of that weight while staying true to what made it such a beloved franchise in the first place. Tutorials teach you the basics as you go without being too overbearing, finding and gathering materials doesn’t become a full-time job, and even crafting essential items is handled through a vastly more simple menu. In the past, some of the most vital pieces of information needed for a successful hunt were left up to the player to research and discover.

All the relevant information would usually appear on elaborate fan-sites and Wikia pages, but the external prep work expected of players before each hunt wasn’t always apparent - and it’s something that never should have been expected in the first place.

All of the weapons from previous games return, but those who fell in love with the Hunter Style system from the recent Generations games may feel like something’s missing; though most of these quirks and skills have been weaved into Monster Hunter World’s more elaborate combat.

Even something so simple as damage numbers are new here. The lack of feedback in the past meant it was difficult to know whether you were making a difference in co-op hunts at all. One simple tweak changes all that; and it effects more than you might think. Gone are the days of wondering which part of a monster to hit and when. The difference in floating damage numbers will point you in the right direction, and the continued omission of a health bar will keep you on your toes for longer. 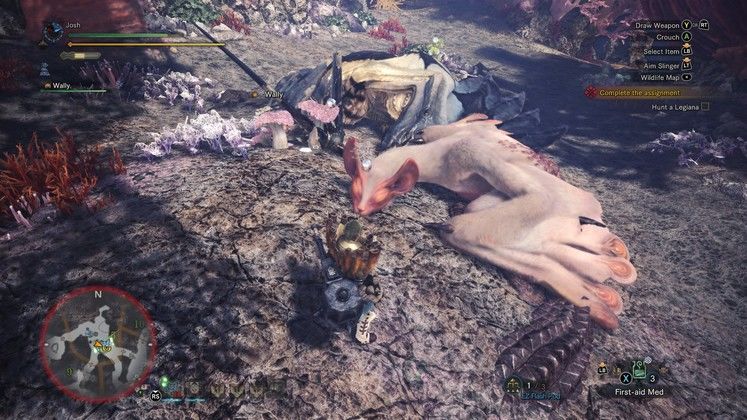 Scoutflies create a sort of GPS system that ensure you’ll never get lost in the boundless landscapes of the New World. You’ll never lose a monster after forgetting to tag it, and even pinpointing a previously discovered material on the map will lead you straight to where you’ll find it again. There’s hundreds of hours of content tucked away in here, and the fact that it’s possible to up your chances of getting specific loot by switching up your strategy in a fight means the grind rarely feels like a grind at all.

But we’re 8 months into the Monster Hunter World at this point. You’ve either read the reviews or played the game on a console. So we’re here to talk about the PC version. In a nutshell; it’s astonishing. A true testament to PC ports. Capcom have wowed us in the past with a stellar version of Resident Evil 7 last year, but the extra time taken to polish and perfect Monster Hunter World shines through without question. Early reports at places like Descructoid and IGN painted the picture of a CPU hog that, while maintaining good performance, would crash without warning within around 30 minutes of play. 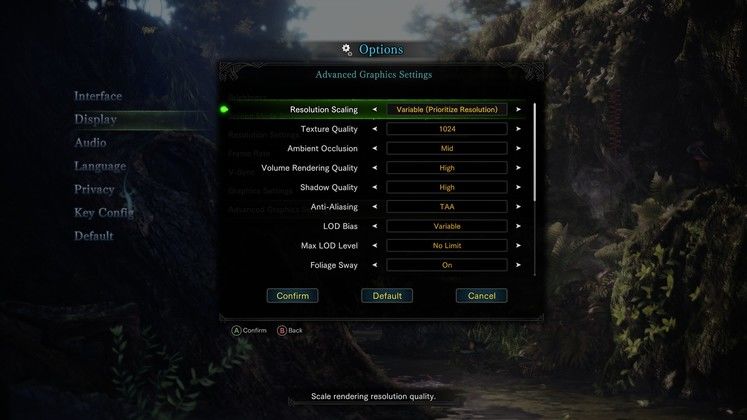 Soon after, Capcom issued a statement assuring the bug would be ironed out by release. And it was. Within days the problem was eradicated (even before we got our preview code) to the point where I can comfortable confirm that I haven’t run into a single problem at any point of my 20+ hour playthrough.

The game runs flawlessly at the default ‘High’ settings at 60fps despite my PC almost exactly machining the recommended specs for ‘High’ settings at 1080p/30fps. And hasn’t crashed once. I can tab in and out and disconnect my controller as much as I want and Monster Hunter: World will spring back to life in an instant.

But it isn’t the graphical fidelity or the lack of game-breaking bugs that caught my attention here. They certainly impressed me, but something else stole my heart. Loading times.

I played enough Monster Hunter World on my launch PS4 to know that sitting through loading screens was an absolute chore. They weren’t the worst I’ve ever come across, but they were noticeable. And given the sprawling landscapes being rendered as you switch from hub to quest, they didn’t surprise me. But Monster Hunter World on PC is at a whole other level. Slap this miraculously small 20GB install on an SSD and you’ll barely see a load screen at all.

Loading any environment, whether it’s the Coral Highlands or the Rotten Vale and you’re playing in seconds. You can run from the bottom of base camp to the top, grab a quest, load into the zone, abandon it and load back into base camp in under a minute. It might seem silly to gush over, but seeing the PC debut of Monster Hunter in the West treated so well honestly tears me up. It blows my mind.

Put simply, Monster Hunter World is the same beast with a new skin. It’s still just as difficult as before, but looks and feels far better. Gone are the more needlessly annoying aspects of preparation and combat, leaving a game that’s far easier to jump in and out of than ever before. And while some may view the steadier learning curve as a franchise pandering to a casual audience, the difficulty of each fight remains the same.

Capcom perfected the combat formula over countless releases, but it wasn’t until Monster Hunter: World that they stripped away what ultimately was never much fun to begin with. You spend less time spent preparing, and more time actually fighting. And sales figures suggest, as we all expected, that Capcom really had something special sitting under all that bloat.

Breaking down Radobaan to the music of the Rotten Vale sends shivers down my spine.

Josh is the MMO/JRPG guy with an addiction he won't admit. Soppy manga is his retreat.