Pac with a vengeance

Put some time aside this year. Make sure the kids are occupied, you've revised enough for January exams, and complete whatever chores you have with haste. Pac-Man is back, and building on the excellent Championship Edition that was released a couple of years ago, Championship Edition DX is something rather special. Sure, we're still trying to satisfy the little yellow icon's hunger, but obesity is inevitable after experiencing the opening few stages of this ingenious update. Obesity for the lead himself, and most likely the player too, such is the power of addiction.

As usual, you're tasked with getting the highest score possible by eating a range of tasty treats. The yellow nuggets are the ever-present, the snack that begins the cycle of ramping up a huge amount of points. Clear the path of these, and a fruit or something similar will appear, just like we all remember from the classic game. Fortunately, Namco Bandai have implemented a new type of ghost that provides the series with some huge excitement. The green ghost sleeps on the playing area, that is, until you rush past them. Wake them up and they'll follow your every move. The objective here is to get as many green ghosts chasing your position as possible. When you've successfully eaten a giant dot, things begin to get crazy. Turning the tables, you're now able to munch your way through the snake of ghosts that follow your position. Not only is this visually spectacular, it's the best way of moving your way up the leaderboards.


Pac-man has also been granted some valuable defence this time round. If the attention gets too hot, a quick press of the trigger will bomb your enemies. This sends them back to the centre of the screen, and provides players with a few seconds to catch their thoughts. There's a small penalty to pay for doing this, as your game speed lowers itself, but it's not as harsh as being caught by the persistent critters. Namco want you to score big, and they certainly allow a lot of room for error. Bombs should be saved for moments that are impossible to escape from, as otherwise, there's a neat trick to bypass any threat. If you're heading towards a ghost's position and get too close, the game will enter a phase of slow motion. By changing directions a few times, you may carve yourself enough space to squeeze past trouble, or better yet, trick ghosts into turning round as they think you're moving in another direction. It's a skill that shouldn't be overlooked, as it allows speed to be maintained and also keeps the chain of ghosts running behind like a group of orphans chasing Madonna's backside to Hollywood.

Alongside the main mode, there's an abundance of other challenges to work through. In Time Trial, Namco cleverly install a system that'll keep players interested far beyond what they probably should be, as each maze has more than one trial to play. Namco have made it so that every time you do set a time (by eating a certain amount of fruits), you'll rocket up the overall leaderboards. Your best time will hack off seconds from a set score, with the objective being to get it as close to zero as possible. Working backwards is the perfect way to chart progress, and rewards those who play all the game has to offer. The leaderboard is a major feature too, as every level and minor challenge from each maze has its own set of scores. These in turn contribute to an overall leaderboard, which means you can see exactly where your rank is suffering.

Other challenges also see the new ghosts coming into fruition. One of the game's toughest tasks comes in the form of a combo challenge, where you need to eat as many of the green critters as you can in one go. Keeping a chain of ghosts is vital here, as one more may send you up the leaderboards. It really is that close too, as Pac-Man Championship Edition DX forces players to make every second count. Just like the original, one wrong turn or a hint of hesitation can transform an excellent score into something ordinary.


Pac-Man's return has also paved way for some stunning visuals, as you're treated to a variety of different looks. You might want a neon-tinted update of the original, or something from a more flashier period of history that spans 30 years. Colours are vivid and burst from the screen with every move you make. Many journalists will claim it's 'Pac-Man on speed' or 'like taking drugs', but having never experienced illegal substances, I'll compare it to the thrill of running away from a squad of purple-faced policemen after setting a fireworks shop alight. It really is a sight to behold.

As far as 2010 goes, it’s mightily difficult to recommend a downloadable title more than Pac-Man Championship Edition DX. Namco Bandai have produced a stunning 21st century re-imaging of the classic formula, and have allowed a new generation of player to get comfortable with a game that many younger users would quickly dismiss. In fact, the only way we can fault this title is if we imagine Pac-Man is chomping down schools of young children. Fortunately, he’s not, as the ingenious update to the arcade classic effortlessly eats its way into the elite of 2010.

Munching through a horde of chasing ghosts. 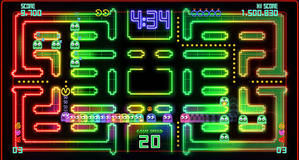